There are a few movies that I love and enjoy thoroughly, but received horrible reviews. First is Country Strong. I really cannot stand Gwyneth Paltrow for a number of reasons, but one important factor is because she claims she is really good friends with Beyonce. Let’s be serious. Beyonce and Gwyneth? Definitely not on the same level. (I am so jealous.) But for some reason, I love Country Strong. It’s my go-to movie on a rainy day.

Then there is Spanglish. I have seen it numerous of times. I don’t know what it is about that movie, but I love it. In that movie, Adam Sandler plays a chef. In one of the scenes, he makes himself a great sandwich where he adds an egg, which was perfectly over easy. Every time I watch that scene, I crave a sandwich that includes an over easy egg, but I never had the balls to try it or make it. (And I don’t like sandwiches.)

I have been cleansing for over a week, and I am limited to what I can eat. When I am not eating, but juicing, I plan for my meal as if I haven’t eaten in months (even though it is for two days). My next recipe was so delicious that I am wishing I had it right now.

Step 1: Pop your turkey bacon into the oven. Be sure not to cook them through. (They will be added into the quinoa later).

Step 2: Next, bring the water, olive oil to a boil. When it comes to a boil, add rosemary and sea salt. 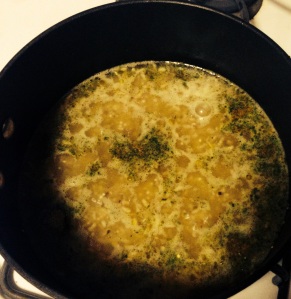 Step 3: Dice the onions and green peppers. Get it prepared for it later as the quinoa cooks. 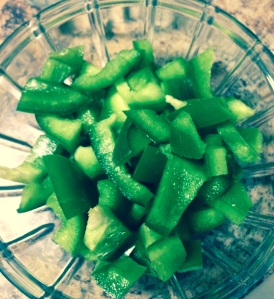 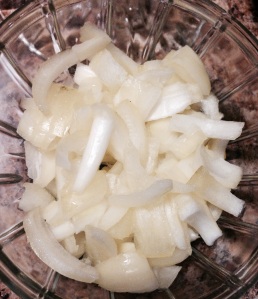 Step 4: Mix a small amount of olive oil, ground basil and ground parsley together. Add the diced tomatoes and toss it in. Marinade the salmon burger and set it aside.

Step 5: Take out the bacon.  It should be almost cooked through but not completely.  Start tearing the bacon into pieces. Be careful, it’s hot!

Step 6: The quinoa should be cooked and the water should have evaporated.  Take the it off the heat and set the quinoa aside. 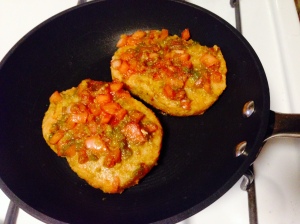 Step 8: In a larger stove top pan, add butter and garlic. Saute it. Add red chilies if you want. Then, add the onions. Saute it. After a few minutes, add the bacon. Saute that and make sure you are constantly tossing it around. Lastly, add the green peppers. Again, toss it around and make sure the bacon is thoroughly cooked. 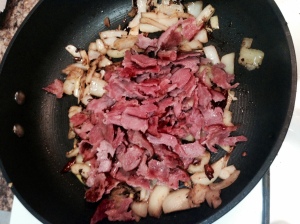 Step 9: Here’s the fun part! Add the quinoa. Stir it in. Toss it around for a few minutes and set it aside. 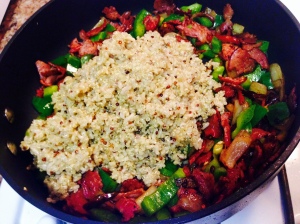 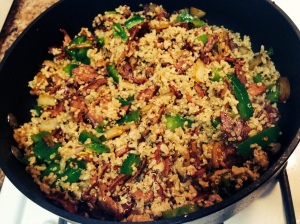 Step 10: Check on the salmon. Make sure it is cooked. We don’t want to get salmonella! 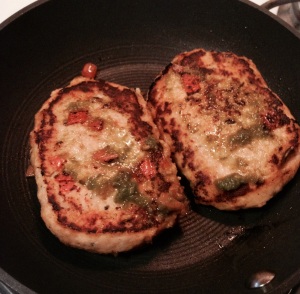 Step 11 : I layered the quinoa and then added the salmon on top. This is when I got experimental and added an over easy egg on top! It was delicious! 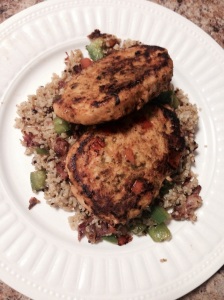 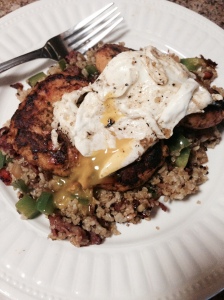 I hope yours turns out just as good as mine did! Enjoy!

On aside:: I have really been into MØ. She’s a Danish, and is super fab. But more importantly, she did a great cover of Spice Girls’ Say You’ll Be There. I am obsessed.