Recently, I experienced my first house/techno concert, and I was all about it. I have always been indifferent about going to an EDM festival for the sole fact it is not a place to dance and enjoy music, but rather a place to take drugs at a rave-like concert.

I don’t get it. First, when did EDM become such a phenomena? I am not saying that I don’t enjoy dance music, but it boggles my mind that people will throw away hundreds of dollars (take in account drugs and alcohol) to be sweaty baboons for a whole weekend just because it’s become a recent fad.

My friends and I went to Kaskade a few weeks ago at the Barclays Center. Jenny and I have always said out of all the DJs, we would have to see Kaskade when he comes. The reason I like Kaskade is because of Anderson. Since we were in high school, she’s been jamming to Kaskade. Also, Kaskade is more mellow and tolerable unlike Skrillex or something. So when the pre-sale went on, we had to get the tickets before they sold for a ridiculous amount. We rounded up the Insane Clown Posse and were ready to get wild at this concert. 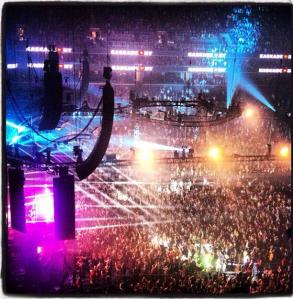 Now, the last concert I went to was Britney Spears, and when the ticket read 8pm showtime, she would be out by 8:30 the latest. I have a tendency to have anxiety for group events because of the planning. That day, I was filled with anxiety. There was so much to do! We needed to get our fabulous outfits, get a lite lunch and on top of that, I wanted to get a professional photo shoot done for our Christmas cards. In the midst of all this, I had Geri asking me 10,000 and one questions about the exact plans, which added more to my anxiety. (That’s one of her favorite things to do.)

I really try to keep calm and pretend not to be anxiety ridden, but deep within I was dying. We were on the road by 6:30pm. But we had to stop to pick up Geri’s whole wallet that she conveniently forgot. Our pick-up stop was Burger King. As soon as Geri gets her wallet, she pretended that she needed to go to the bathroom when in reality she came out with a bag full of food. Now it is 7:30pm, and I am slowly heart attacking.

Finally, we get to the parking garage by 8:05pm, but we had to pregame because we assumed the drinks at the venue would be overpriced. We hung out in the garage and took pictures and shots. No big deal, except now it is getting close to 8:30. We get to the door and they are checking bags. Of course, Geri wasn’t allowed to bring her make up bag and was in the brinks of tears, as per usual. GOL. But then she tried another entrance, and they let her in. I wasn’t sure what security protocols were in place, but not everyone got the memo.

So we are in, and we are rushing to get to our seats. I kind of felt like I was in Home Alone 2 when the family rushes to their flight. But I was confused at why there were so many people not inside the concert. Maybe he was going to come on at 9pm, which I was I relieved about. We get to our seats, and decide to go get drinks because he wasn’t on yet. This is when I start losing my mind.

Literally, there were children every where, and I am not being dramatic. I couldn’t understand how these children were allowed at a concert like such? More importantly, I couldn’t understand why all the youngin’s were dressed as slores? Like do they not watch SVU? Having your butt cheeks out and wearing a bra is not acceptable in the real world and only brings trouble. Maybe Miley does it, but she is a celebrity that gets paid to be provocative. These kids were wearing the most absurd things. Like when did this look become cool? I love fashion and I can appreciate something out of the box, but if you aren’t a prostitute or a performer, there is no reason to dress as such for a concert. You could tell who was older versus who was under 21. To add to this baby prostitute party, most were on Molly, which I don’t understand why it is cool to take? But that’s my opinion. What happened to your standard alcohol? And your occasional recreational drugs? The worst are the ones who cannot afford to lose anymore brain cells.

While on line to get a drink, I had a girl come up and ask me if I was 21. I took that as a compliment for my youthful skin and an insult because I surely wasn’t dressed like a hooker. As I assured her that I was 21, she told me a sad story how her license was expired and asked if I can get her a drink. Again, do people not watch SVU? Any creep can say yes and then GHB their ass. Good thing I wasn’t a creep and I ain’t a fool to fall her story.

It’s 10:05pm and Kaskade emerges. By that time, I was sober, but I still found myself in love with the concert; clear headed, in the zone and one with his music. Next Kaskade concert I go to will have to be 21 and over. Next concert I plan to go to is Celine Dion where the concert starts as stated on the ticket, and where I won’t be worried about the under age kids literally rolling down the stadium.

On aside:: With all this Kaskade talk, here is one of my favorites. Please be responsible when listening to such.