Back in college, I had no shame. I would say and do things that I shouldn’t have just because I didn’t care. There is one particular story that I’d like to share. It’s not too often that I have an embarrassing story of Gabriella because usually Jenny and Alaina take the cake for that. However, this one slipped my mind until I was recently FaceBook creeping on this hot toddie. (Don’t get jealous, Gabriella.)

Throughout college, Gabriella’s taste in guys was unknown because she wasn’t prejudice of the colors of the rainbow. I mean, it’s true that we both have hooked up with the same guys, but I mean when you are a good friend, you share your things. Plus, we were young. I want to say it was our Senior year that she mentioned this guy that she found to be utterly beautiful. (I actually just chatted her to confirm, and she told me the exact name of the class she had with him. GOL!) It is really not in Gabriella’s character to go bonkers for a guy. She claimed that they were meant for each other even though they never spoke.

Gabriella tells us that she encountered Chad, the Greek God, and his beauty before she attended Rutgers. She was taking a placement test and he happened to be there, sitting close to one another. I guess that’s when their eyes met and she fell in love. When Gabriella told me this story, I could only imagine what he could have looked like. She told us that he was tall, dark and handsome. I mean I immediately thought he was of Latin decent because that is Gabriella’s type. Also, I mean “tall, dark and handsome” is not that descriptive. I felt that Gabriella couldn’t even speak about him because she would get hot and bothered, like Christian Grey for me (LOL!). 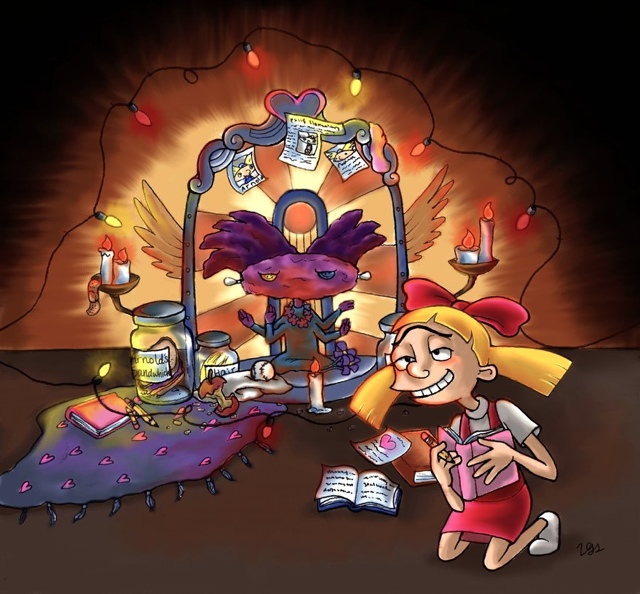 When Gabriella told Jenny and myself four years later after the encounter, we had the ability to hardcore creep because FaceBook started getting super invasive. I mean we didn’t hate it because we were finally able to put a face to this name. So Gabriella tells us his name and we searched. Now, here came our dilemma; we needed to be friends with him to look at his pictures. Gabriella refused. Jenny was being a baby as usual, so I said, “Screw it! I’ll do it.” Even me doing it was a huge debacle because Gabriella didn’t want me to. I mean I needed to see what he looked like and what a sight it was. He was actually lovely to look at and scrolling through his pictures was heavenly. Now, here’s the thing. Yes, he was good-looking, but guys who are that good-looking are usually assholes and have this persona they would have to keep up with. That is why I didn’t care to friend him.

Gabriella had to deal with her desire for this man every time she went to her Psych class. We, on the other hand, were looking for the perfect opportune moment to spill the beans about Gabriella’s lethal love that has brewed for him. (I am GOL writing that last sentence.)

I want to say it was Senior year, spring semester. It was an ordinary night at the college bar we were regulars at. It just so happened to be right around the corner from our apartment. Jenny, Gabriella and myself liked to pregame hard before going to the bar, which I tried to do present day and it completely back fired on me. I guess I am not the party girl I use to be. After having a few drinks at the bar, dancing to Miley Cyrus, Gabriella freaks and starts to panic. Through some blurriness, I remember her saying that she spotted Chad in the bar. I had no idea where she was looking. Girl was straight buggin’.

Those were the days where it literally felt like we went to the bar for 20 minutes. After a few hours later, the bar was closing, and honestly, that’s when the real party happens. You meet people and act a fool. Well, there Chad was. I told Gabriella that I was going to go up to him if she didn’t. Of course, she got Angry Gabriella where her demon eyes peered out and glared with fire. I mean if she wasn’t going to do anything and I am already FaceBook friends with him, he probably would love it if I went up to him to tell him about my friend who has a “Hey Arnold” shrine of him in her closet. Plus, I figured he was a big-headed douche, so why not help his head getting a bit bigger?

As Jenny and I approached him, Gabriella decided to zoom out of sight in the alleyway next to the bar. She was cursing the whole time. I am pretty sure she was plotting out deaths. As I approach this tall, dark-haired, bearded hot piece of ass, I was thinking, “Screw Gabriella. Let me get some of that!” But you know, Gabriella would actually kill me. So instead, I decided to tell Chad about Gabriella’s sick obsession. I found him to be endearing and welcoming. He was giggling uncontrollably, but that sweet, bashful giggle. I was wrong about this guy. He is actually a pretty cool dude.

As we were telling Chad about Gabriella, you can see Gabriella poking her head out from the side of the building. We would show Chad that the creep peeking out from the alley way was the one who had a dear, dear crush on him. He wanted to meet her and we would try to wave her down, but we can see her mouthing every curse written in the English language. Finally, Gabriella comes over and meets him.

Gabriella has a raspy, husky voice. Between all the clowns, Jenny and Gabriella have the deepest, raspiest voices. I sound like a chipmunk next to them. When we have sleepovers and they have to bunk together, we like to say that they are “two men in a bed.” GOL. Once she came up to us, in her voice, in a very subtle, mono tone, she says, “Hi, I’m Gabriella.” You can see she was getting *flushed*. (I use this word because it is the only word that was used to describe Anastasia’s feelings in 50 Shades and I can’t stand it. ) After Chad embraced Gabriella’s infatuation, I am pretty sure Gabriella chased us home to murder us. We definitely ran for our lives. There was a definite possibility (well aware that it is an oxymoron) we took a detour to our friends house to avoid the gory scene that Gabriella was plotting against us.

You know, just till recently, I was the only one who was FaceBook friends with him until Jenny was super jealous and needed to creep on him hardcore. I told Gabriella that I would post this post on his FaceBook page, what do you think? Should I?

On aside:: Recently, I was introduced to this new female rapper. Girl has swag. I love this song. I dance in my room to it. Oh, did I mention she is from Harlem! Enjoy!