For years, I knew, subconsciously, that I wouldn’t be able to have kids.  It’s a sad thing, but it is something some women have to deal with.  Granted, I can always bank on a miracle, but I need to think realistically.  Just recently, my sentiments were confirmed by a specialist.

For me, if there’s a will, there’s a way, and that “way” is to rent out someone’s uterus.  But why rent, when I can crash on a friend’s couch for a fraction of the cost?  Eliminate the costly monthly fees, but just pay for the necessary utilities?  I mean, who wouldn’t want that?

In college, I made sure I had back up ovens. Anderson said she would do it, but I know she wants to be an actress and what not, so I don’t want to cause possible damage on her moneymaker. Maggie said she would do it because she doesn’t want her own, so she wouldn’t mind. However, I am scared that my kid will end up having a big head, like mine, and then Maggie’s small, tiny body will have to suffer.

However, there is one that I can honestly say has the capacity and vacancy to hold my munchkin. Jenny. She always tells me she can’t wait to get pregnant so she can eat all day, everyday, but doesn’t know when that day will actually come. I can make that come true. I always said that if she had a kid, it would come out wanting pasta and skip the baby food.  Jenny is being too difficult and will not commit.  I feel that my first choice, to have a bun cooking in, is Jenny’s oven (after she quits smoking, of course).  In return, I would take her shopping for fun maternity clothes and feed her deeeeeelicious yum yums so the baby comes out plump.

To show Jenny how serious I am about “crashing on her couch”, I dedicated a painting to her uterus that I did a few years back.  She is always complaining that I never paint anything for her, but she has the biggest honor of them all.  It is the one painting dedicated to her “oven” and the one painting I ever named. 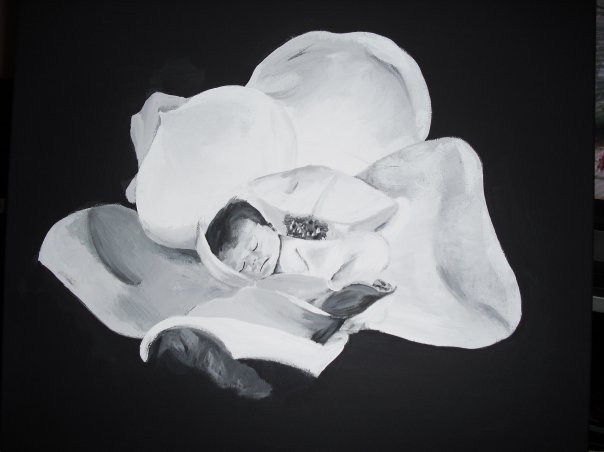 On aside::  I love the Black Keys.  It is no secret that they are musical geniuses.  Jenny and I first discovered them a few years back when “Tighten Up” was played on a Gossip Girl episode.  And it doesn’t hurt that Johnny Depp played alongside them back in June.  Here’s a great song: